U.S. journalists differ from the public in their views of ‘bothsidesism’ in journalism

BY NAOMI FORMAN-KATZ AND MARK JURKOWITZ

The issue of whether to try to provide equal coverage to all sides gained new intensity during Donald Trump’s presidency and the widespread disinformation and competing views surrounding the 2020 election and the COVID-19 pandemic. While some feel that equal coverage is always necessary to allow the public to be equally informed about multiple sides of an argument, those who disagree argue that people making false statements or unsupported conjectures do not warrant as much attention as those making factual statements with solid supporting evidence.

Younger journalists, those who say their outlet has a left-leaning audience most likely to say equal coverage not always merited

Roughly six-in-ten U.S. journalists ages 18 to 29 (63%) say every side does not always deserve equal coverage, while 37% of journalists in this age range say journalists should always strive to cover all sides equally – percentages that are very similar to the breakdown among journalists ages 30 to 49. But those numbers change noticeably for journalists 50 and older, who are evenly split between the two viewpoints.

Differences also arise based on the original platform of the outlet journalists work for. Those who say they work at an organization that originated in television are more likely to say that journalists should strive to give every side equal coverage (55%) than those who work at outlets that started in print, radio or online. Conversely, those who work in online media are the least likely to say this (37%). 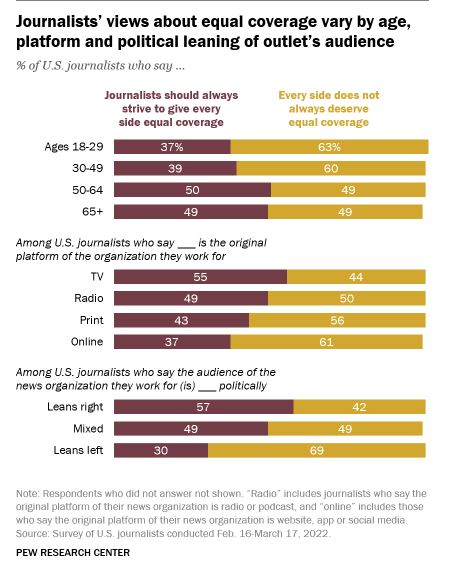 There is also a notable difference among journalists based on how they view the issue of made-up news and information. Nearly six-in-ten journalists who identify made-up news as a very big problem for the nation today (59%) say all sides do not always deserve equal coverage, while 40% say they do. Journalists who see it as less of a problem – either as a moderately big problem, a small problem or not a problem at all – are more split: 53% support always striving for equal coverage, compared with 46% who say it is not always merited. Overall, 71% of journalists surveyed say made-up news and information is a very big problem for the country. 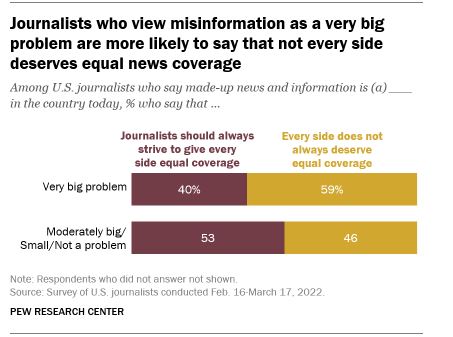 Republicans, Americans with low levels of trust in news organizations more likely to say journalists should always strive to cover all sides equally

Among the general public, strong majorities in most partisan and demographic groups say each side warrants equal news coverage, but there are some differences by political party and age.

Republicans and independents who lean to the Republican Party are considerably more likely than Democrats and Democratic leaners to say journalists should always strive to give every side equal coverage (87% vs. 68%, respectively).

As is the case among journalists, older adults are the most likely to say all sides warrant equal attention. About eight-in-ten of those ages 50 and older (81%) say this, but the share falls to 74% among those ages 30 to 49 and to 71% among those 18 to 29.

Americans’ attitudes also vary based on the amount of trust they have in the news media. U.S. adults who say they have little or no trust in the information they get from news organizations are more likely than those who have a great deal or fair amount of trust to say journalists should always strive to give every side equal coverage (84% vs. 66%, respectively). Those who have some trust in the news fall in between, with three-quarters of adults in this group saying that journalists should always strive to cover all sides equally.

Note: Here are the questions asked of journalists and U.S. adults for this analysis, along with responses, and its methodology. 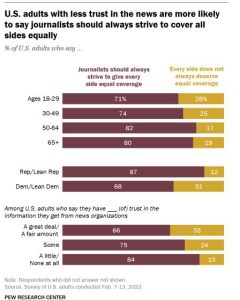